Sony is debuting an IoT chip that can work in fast-moving vehicles with an impressive 60-mile range, perfect for the industry of which Jeff Bezos is so excited.

The chip will use Sony’s Eltres LPWA (Low-Power Wide Area) network announced last week. Launching in Japan this year, Eltres uses microchips in tandem with antennas to relay a signal to a base station which can be over 60 miles (100 km) away.

In an example provided by Sony, a chip-equipped drone monitoring an offshore farm uses the Eltres network for transmitting sensor and location data: 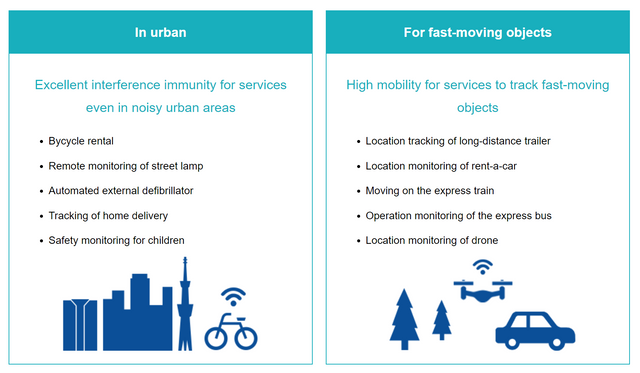 Sony’s chip, the CXM1501GR, integrates a transmitter which transmits signals conforming to Eltres’ standard in the 920MHz band. The chip also features a circuit for impedance-matching with an externally mounted antenna. A GNSS receiver provides the chip with time and position information.

One example use case where Sony foresees its chip having potential is at ski resorts. Friends could keep track of each other, and rescue can be deployed to a visitor’s exact location in the case of an avalanche.

In a bid to circumvent interference problems, Sony’s chip repeats each signal four times with synchronization bits interspersed so the receiver can account for variations caused by a change in the direction of motion.

Samples of the CXM1501GR chip will ship in June. The chip is 16mm×16mm×2.0mm and should run for months off a single ‘button’ battery.