Sprint has announced it will pair its Curiosity IoT platform with 5G connectivity to deliver both a smart city and driverless car lab.

Announced during CES, Sprint’s first large-scale city deployment of its platform will be in Greenville, South Carolina. 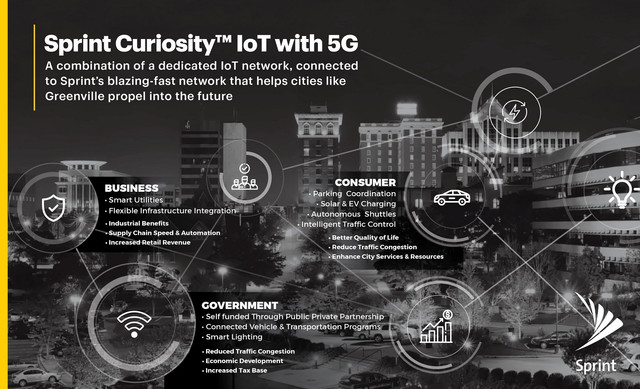 "Cities used to invest in roads, rails and airports; the infrastructure of the future to attract investment is digital," said Knox White, Mayor of Greenville, S.C. "Sprint's Curiosity IoT with mobile 5G is readying cities to attract the business of the future."

Sprint is also setting up a testbed for self-driving cars in Peachtree Corners, Georgia. The location will allow new intelligent mobility technologies to be tested and evaluated in actual driving conditions.

"This state-of-the-art lab will serve as a testing facility for the most advanced automotive technology.

This is much more than self-driving cars, Sprint is bringing together Curiosity IoT, micropositioning and HD mapping, all enabled by our upcoming mobile 5G network, to develop and test the most advanced technologies in the industry."

"Sprint is bringing together Curiosity IoT, micro-positioning, and HD mapping, all enabled by our upcoming mobile 5G network, to develop and test the most advanced technologies in the industry," Rook said.

The lab in Peachtree Corners features a 1.5-mile track for autonomous vehicle tests.

Brian Johnson, City Manager for Peachtree Corners, commented: "Only Sprint has an incredible platform that combines both IoT and 5G which allows us to realise new goals in this digital age."

Sprint also debuted a ‘precision mapping technology’ in partnership with Mapbox during CES. Such precision is needed for safe and rapid decisions to be made in response to changing road conditions.

"Smart machine-based services need to be able to make immediate mobility decisions similar to the way a driver might react to construction, traffic or other obstacles on a street," Rook said.

Mapbox sources data from hundreds of millions of sensors and uses AI to build its real-time accurate maps.